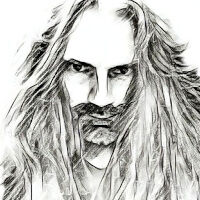 In line with Hawkwind's chequered and confusing history when it comes to band names and line-ups, this release has some issues to deal with if you're even remotely interested in some facts.

Former Hawkwind bass player Alan Davey (with Hawkwind from 1984 - 1996 and from 2000 - 2007, plus a few one-offs), teamed up with vocalist and multi-instrumentalist Danny Faulkner to form Pre-Med in 2002. Or did Davey join Faulkner's project? Recorded history is famously unclear about that. Anyhow, Pre-Med released three studio albums and a live album, before in 2011 Davey left Pre-Med.

The first album, Invisible Spies from 2005, was re-released (having the same music and versions, as far as the universe can tell me) in 2006 with a different cover and under a different title, Medication Time. Pre-Med ceased to be, but recently had a re-start. I assume this collection is a way to celebrate that re-start.

Adding to the confusion, this release is commonly listed under Hawkestrel, Davey's project with other former Hawkwind musicians that was started a couple of years ago. It's available from the Hawkestrel Bandcamp page, the Pre-Med page has not been updated since 2015, decent photos of the original albums are hard to find. Promotion is not high (pun intended) on the list of their priorities. But I am going to list this under Pre-Med because, well, it is Pre-Med music.

And what about that music then?

Although space rock and the name Hawkwind are almost synonymous, after the intro track, it's obvious where Pre-Med is going, and it's in a slightly different direction than Hawkwind. This is heavier. It has a bit of a doom influence, with more heavy rock. Several intermezzos and intros could easily have been from Hawkwind records, though; either the 70s or the 80s. And with a bit more electronics, even the 90s. But overall it's all a bit heavier. Think about the energy of Assault And Battery (especially the heavier and faster versions as played in later years), but keeping that level for most of the album. Where in later years, electronics would make Hawkwind go in the direction of Ozric Tentacles, Pre-Med are keeping the Orgone Accumulator pace and have, ahem, accumulated more influences along the way.

To be clear, I prefer that heavy side! I remember a late 1990s Hawkwind gig where I kept hoping that Dave Brock would come out from behind his keyboards and play some more guitars. Well, Pre-Med has that guitar, offering a better mix for my tastes.

Higher shows the inclusion of more Eastern melodies, something Davey has clearly been a fan of, but that we've also seen in Hawkwind's music (Hassan I Sahba, among others). Interesting that when there are clear Hawkwind references, it's mostly the Quark era.

With the guitar playing more of a lead, the trippiness comes more from the melodies than the repeated riffing. A couple of tunes (Invisible Spies and Man Eggs From Mars) have real metal guitar solos, which are fitting, as well as giving more variety.

And with a track like Man Eggs From Mars (written by Steve Leigh, formerly of Landmarq), there is a more progressive approach as well, both through a keyboard solo and a heavier emphasis on melodies and changes. After several spins, I find that when I only have a short time to listen to some music, the pairing of Invisible Spies and Man Eggs From Mars is what I return to.

A set of songs like What's Your Name and Once Upon A Line give some room to breathe, but only to take in the aural assault that is Medication Time. The bridge between Hawkwind and Motörhead!

This first album touches several related genres and will definitely appeal to lovers of melodic heavy rock and space rock. Faulkner has a voice with a slight roughness that is perfect for this kind of music, a good range, and a pleasant accent.

The second album, The Truth About Us, shows slightly more focus on songwriting. The first couple of songs are more structured and possess a little more variation, with fewer space intros and interludes. It is as heavy as the heaviest songs on the first album, and the choruses are catchier.

5 H T P and Death Of A Star are the resting point, with the latter still being an aural experience of true progressive rock, with different sections, and a lovely and spacey keyboard solo in the best Pink Floyd style. Has The World Gone Insane is the Man Eggs From Mars for this album. What a storming melodic feast of bombast it is.

This album also has a genuine Hawkwind cover with The Demented Man. I think that is one of the most beautiful slow songs that Hawkwind ever recorded, and Pre-Med stay relatively close to the original. Faulkner's voice is really good for this type of music too.

Personally I'd end an album like this with a heavy track, but the dreamy Debouch is the come-to-peace-with-the-end track here. Maybe a different track sequence would make me appreciate this song more, but I am too much in awe of the previous tracks.

The third album, Einstein's Day Off, shows a bit of a change. The beginning is much in the same style, so listening to all the tracks from all three albums (digital media, all files in a folder) wouldn't tell you clearly when the third album begins. After two tracks, that compositionally are closer to the first than the second album, there's a spacey interlude.

The Robonaut Project is a slower but still heavy track. The lack of variety in songwriting is saved by a spacey keyboard solo. Fear Is Temporary is faster but goes on in the same speed and riffs for a long time, save the metal guitar solo. Tracks like the title track and Energise bring more changes, but somehow these songs fail to grip me for their duration. It's hard to put my finger on why, but it's as if these songs are too polished. Not the playing, but the songwriting and production.

Biosphere is more progressive again being longer, slower, and more melodic. Fragile Ship is faster and heavier but has again a more progressive approach. The Stargazer's Apprentice has almost everything Pre-Med has to offer and is by far the best track on this third disc, which like the previous one ends with an outro instead of a bang. Faulkner's voice is as good as ever, sounding large and wide. The playing is good overall. The third album has more keyboards and the slicker production might make it more interesting for prog fans, but if you ever listen to Hawkwind or related bands, you must give this a listen.

I am very glad this version has not fallen victim to the loudness war that is still going on in remaster-land! No compression has been applied, so the more silent sections are still silent and there is a good contrast, something that is an important part of music like this.

The physical product is shipped as an eight-panel digipack with a beautiful cover.

Good news is that the band are preparing a new studio album to be released later this year. Steve Leigh is part of the new line-up as well. His songs and his work on these albums are really adding an extra layer, instead of just adding spacy effects to the riffing, so I am really looking forward to this.

Personally I hope the style and sound will be a bit more like the first or second album, but even an album that is close to the third one, will be a real stormer.